Day 25: Think of any word, search it on Google Images. Write something inspired by the 11th image.

I wrote a cliffhanger and it turned into the longest challenge post I’ve written. The word was “mystic” and here is the 11th image off Google Images: 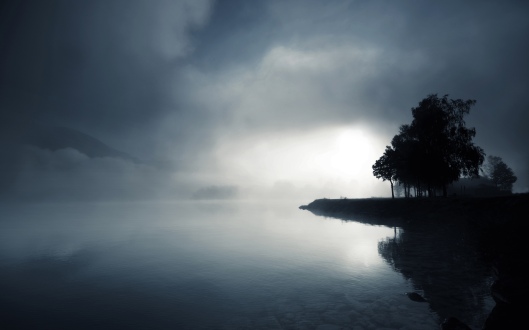 I’d spent most of my life avoiding this place.

Death had a funny way of tricking you into taking the wrong turn and summoning you at the time it deems fit. As I rowed closer to the secluded island cabin I’d been running from since my early teens I realized no matter how many routes I took to hide from this place, the monster in the maze always finds you.

I’d received a letter from my grandmother’s attorney three weeks ago alerting me of her death and the time and place where her will would be read. I held strong to the hope she had forgotten about me and left this eerie nightmare to one of the cousins I’d been warned to stay away from.

But it seemed her mind had been set on me becoming the eighth generation of Fallos women to own the little wood cabin only accessible by boat.

“I need a motor on this thing.” I groaned as I continued through the fog. Every once in a while the moon would peak through the clouds to give me a clear view of my surroundings but I was mostly relying on my iPhone’s GPS. The moon shone through once more and I turned to see the shore in front of the cabin a few yards away. I blew the strand of hair out of my face to stop it from further tickling my nose and flexed my hands around the oars.

My grandmother was eccentric to put it mildly. She hated technology and anything remotely mechanical. She never upgraded from a row boat because she believed the rowing helped keep her young and in shape. She never wired the cabin because she feared the government would use the electricity to spy on her.

I really wouldn’t doubt that though. We were never a normal family.

Our ancestors were burned at the stake hundreds of years ago in England. Surviving family members would move all around what is now known as the United Kingdom and Ireland but each time we always lost one to a torch’s kiss. It wasn’t until the 1770s when the Fallos finally moved to the United States that we stopped burning. But it came at a price.

Some say the price was cheap but I say it was steep.

We were witches; at least the females were. Though I prefer the term wiccan because it sounds much nicer and people don’t question it as much.

As unbelievable as it sounds, my great-great-great-great-great-great-grandmother made a deal with George Washington; assistance of an otherworldly nature that cannot be combated for free passage and living in seclusion in the US. To this day, my family is called on during wartime to “fix” the war. Except that one time my great grandmother over-chanted a curse meant to squash the Civil War in its’ early days. She was reprimanded by being forced to serve as a healer during the Battle of Gettysburg so she would see what she had done. From that point forward each of the women in our family tried running from fate but always ended up plunked right back on this fog-infested body of water rowing toward this antique of a home.

And I was no different.

I’d gone to university and become a small business owner all without the help of magic. I held to the hope of “if you don’t use it, you lose it” being applied to my magic. Instead it would spark if not used regularly. Once, I hadn’t used it in eight months and all it took was slight frustration over our Wi-Fi connection at my store. Next thing I know, feds are crawling all over my town posing as members of the United States Geological Survey and telling everyone the sudden bursting of every window in town was due to an abrupt earthquake. They even passed out pamphlets on what to do when earthquakes strike.

I jolted forward and floated forward a few feet. I flicked on one of my flashlights and turned to see the rickety dock right behind me. I had gone right into one of the posts while lost in my thoughts.

After getting the boat into position and tied to a post I grabbed the bag full of lanterns and insect killers and thudded along the dock to the muddy bank. The flashlight guided me along a mismatched stone pathway leading to the front door and I spied the different plants lining the way. Angelica root, lavender, thyme and silverweed to name a few were overgrown. I can’t imagine what the garden behind the cabin looks like.

I stopped when I reached the half-rotted porch. It seems my grandmother had stopped caring about safety at her tender age of 98. I toed the first step and was relieved when I felt the buzz of magic shoot up my foot and fizzle in my calf. So she hadn’t lost her mind after all. She must have reinforced every board holding this place together. I bet even the thinnest of boards could hold a bulldozer.

I stepped onto the first step, stopped and eyed my surroundings. This seems too easy.

I took another step and smiled. There it was.

My family didn’t believe in keys to lock your house; they believed in curses. I had figured my grandmother would have placed it at the first step but instead she put it on the fourth and final step. The power of it felt like standing in front of an open oven from the second step.

The third? I imagine this is what the interior of an active volcano feels like.

I slipped a Swiss Army knife out of my pocket and pricked my finger. Curses like these only stood down if a blood relation was there to pacify it and this was the quickest way to prove it. I fought the urge to curl my hand into my body away from the heat and placed my bloodied forefinger to the fourth step. The result was nearly instantaneous and I felt a refreshing cool wash over me with an after taste of eucalyptus.

I pocket the knife and wiped my hand on my jeans and continued up onto the porch. Various chimes, wilted flowers and talismans decorated most of the space except a clear path to the solid wood front door. I walked forward and stopped myself before opening the door.

After 30 years of running, I was finally walking back into my personal hell of seclusion and magic.

I took a deep breath, twisted the handle and opened the door. I closed my eyes even though I knew I wouldn’t be able to see inside the dark cabin. The smell of dried herbs and spoiled potions assaulted my nose and I shuddered.

I took a deep breath, opened my eyes and looked straight into the abyss. Slowly, I rose my flashlight and gasped…