Day 22: Put your music on shuffle and post the first 10 songs 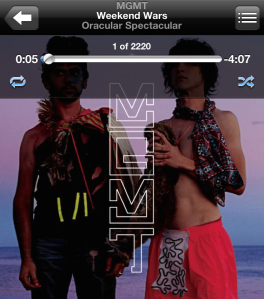 I have a varied taste in music and I think having 2220 songs shows that variety. I put my iPod on shuffle without knowing what would turn up and thankfully it wasn’t anything too embarrassing though I will admit 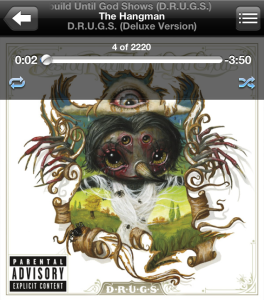 number 11 was the “Doctor Who” theme song.

MGMT – Weekend Wars
MGMT is the definition of guilty pleasure for my ears.
Icona Pop – I Love It (feat. Charli XCX)
This is one of those songs you here when watching your favorite show (in this case “Girls”) and can’t get the song out of your head. The solution becomes download the song and listen to it on repeat in an attempt to get it to stop making you hum the words you don’t even know. P.S. it didn’t work.
Black Veil Brides – F.E.A.R. Transmission 1: Stay Close
This isn’t really a song but one of four “F.E.A.R. Transmissions” that play on Black Veil Brides’ album Wretched and 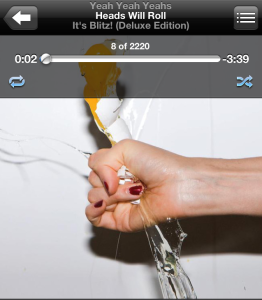 Divine.
Destroy Rebuild Until God Shows (D.R.U.G.S.) – The Hangman
I really loved this band’s album and was happy one of the songs appeared in the first 10 of this challenge. Seeing as each member came from a different Warped Tour success band it’s a blend of different elements from some of the great bands that came off that tour.
Nirvana – Son Of A Gun
I’ve been very vocal about my love for 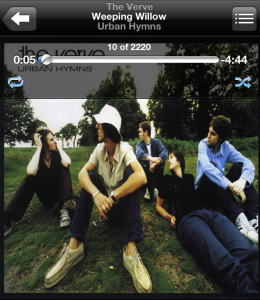 Nirvana and with the amount of their songs on my iPod it shouldn’t be shocking that one showed up to the challenge.
Foo Fighters – Breakout
Ironic that the song to play after Nirvana was Dave Grohl’s band after Nirvana ended. I’m not the biggest Foo Fighters fan but I did download their grates hits album because all the songs I do love were on it. Given Grohl’s recent injury during a show I think we can all agree he’s a true rock star who powered through a broken leg to finish the show.
Chris Isaak – Wicked Game
I’ve no excuse.
Yeah Yeah Yeahs – Heads Will Roll
I dare you not to want to dance.
Dynamite Boy – I Want It That Way
Seeing as I grew up with boy bands and pop princesses but I can no longer stomach them this is the best alternative. the Punk Goes Pop album can be a mixture of funny and frankly better versions of the songs you grew up with.
The Verve – Weeping Willow
I love The Verve and I was so excited when they announced a new album all those years after their first. I think they’re understated and mellow which is perfect when you’re trying to relax but don’t want to listen to orchestras.