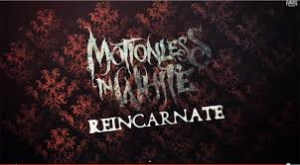 Congratulations to the fans of Motionless in White, the new album is here! Just shy of two years after Infamous, Motionless in White has returned with their third studio album, Reincarnate, a 14 track headbanger’s dream. The Scranton, Penn. natives prove heavy metal can have a strong presence in an industry dominated by pop and country.

Title track Reincarnate and Puppets 3 (The Grand Finale) were available in July as part of pre-orders. With the two songs giving a preview of what was to come, fans were waiting in anticipation for the September 16th full release.

Starting with what is sure to be a metal anthem, Death March, MIW sets us up for the ride of heavy guitars, keyboards and lead vocalist Chris Motionless’s healthy balance of scream and melody. Fans won’t be disappointed in Unstoppable, Everybody Sells Cocaine, Generation Lost and Dead As F**k as they will have you shamelessly singing along no matter who’s around to see you do it. The album ends with the acoustic version of Infamous’s Sinematic, which round out the metal album with a mellow edge reminiscent of The Smiths.

Guest vocals include Danny Filth of Cradle of Filth, Maria Brink of In This Moment and Tim Skold.

Reincarnate premiered at #9 on iTunes top albums and #1 on iTunes Metal chart.